In late 1996, as Listener magazine entered its third year of existence, the Spendor SP100 became my reference loudspeaker, and would remain so for a considerable time. My decision to try the SP100 was influenced by John Atkinson’s review of its antecedent, the nearly identical Spendor S100, in the December 1991 issue of Stereophile. But my purchase decision came down to two things: The SP100 did virtually everything one could ask a modern loudspeaker to do, requiring in the process far less amplifier power than usual. Just as important at the time, it sold for only $3300/pair—which explains how I could afford them on the spotty salary of a teacher turned fledgling publisher.

I might add a third factor: The unapologetically big, boxy Spendor SP100 fit my idea of what a loudspeaker ought to look like far better than any of the towers, triangles, pyramids, panels, or pee-wees on the market. Then as now.

This flagship of Spendor Audio’s Classic line has undergone its second revision, and is now in R2 (Revision 2) form; thus, when offered the chance to give it a spin, my hearty Hell, yes.

Description
Spendor remains among the few high-end speaker manufacturers that design and make their own drive-units; indeed, as company owner and design director Philip Swift mentioned in a recent conversation, some of the tooling used to make the drivers in my Classic SP100R2 review samples was used in the early 1970s, to make their classic BC3 monitor. That distinction, according to Swift, is more than just marketing fluff: “One of the things that sets Spendor apart is that we understand how our drivers work.”

Two of the SP100R2‘s three drivers are made in Spendor’s factory, in Hailsham, East Sussex. First is an 11.8″ Bextrene-cone woofer that incorporates a cast-alloy frame, a ferrite magnet, a fabric dustcap, and a half-roll surround made from what Swift describes as “a synthetic simulation of a natural latex rubber” and says has the best qualities of a modern polymer. According to Swift, the damping of this driver is accomplished differently from that of its immediate predecessor, with a newly chosen compound on the rear side of the cone and a very thin coat of a cellulose-based material on the front.

The SP100R2‘s 7″ midrange driver, also designed and made by Spendor, has undergone even more development, with a new polymer cone, 5″ in diameter, that’s said to be much stiffer than before. The driver’s surround has also been made stiffer, while its ferrite magnet remains unchanged. As with my old SP100, the rear of the midrange driver is contained within a sealed subenclosure made of MDF. With crossover frequencies of 500Hz and 5kHz—the latter is exceptionally high—Spendor’s 7″ driver is responsible for the vast majority of the SP100R2‘s output. (One can’t help noting that a major portion of the speaker’s output is acoustically supported by a generously sized baffle.)

The 0.8″ tweeter, recently introduced to the line, is made to Spendor’s specifications by the Norwegian firm SEAS. Its small textile dome is augmented with a larger-than-usual half-roll surround, which endows the tweeter with the power-handling capability and radiation characteristics of a larger unit, according to Swift. 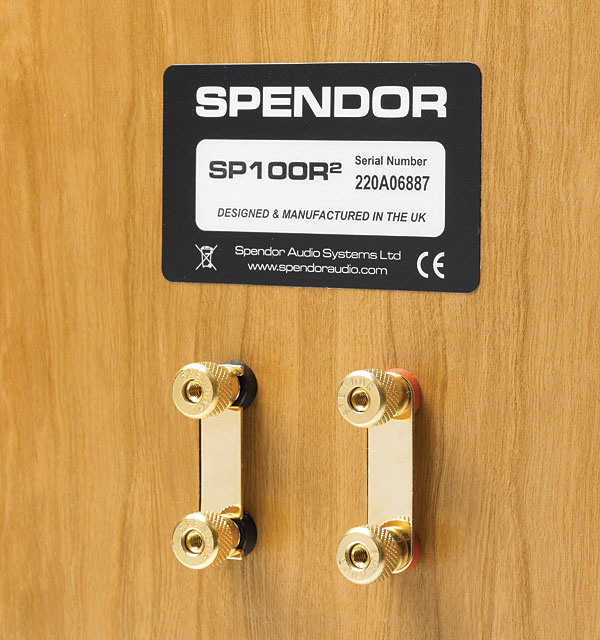 In addition to the drive-units noted above, Spendor also makes some of the components used in their crossover networks—most notably their hand-wound chokes and autoformers. As Philip Swift observes, “We use an interesting technique: Our inductor has tapping points, so we get an extra two or three dimensions of control over the phase coherence of the crossover. It also means we don’t put attenuating resistors in series with any of our drivers, since we can use a better-sounding autoformer instead.”

As with all Spendor Classics, drivers and crossover networks are mated to an enclosure whose design has little in common with the products of most other contemporary speaker makers. It’s an intentionally thin-walled and thus mildly resonant cabinet: not because the people at Spendor don’t know “better,” and not because they’re too cheap to make and sell a more massive product, but because 40-plus years of experience has told them that this is the way to make the sorts of musically agreeable speakers demanded by an enduring portion of their consumer base. Swift elaborates: “If you have too much mass, you store energy—which, if released slowly, can spoil musical timing.” The MDF cabinets do, however, make judicious use of internal bracing and thin, bituminous damping pads, the latter sharing space with what appears to be very-good-quality acoustical foam. But, in a first for this model, foam is no longer used to damp the two front-mounted reflex ports. “That was done for the good reason of preventing high-frequency noise from coming out of the port,” Swift says. “But now we have a flared port which accomplishes the same thing—and looks much better.”

There’s just one more change evident in the SP100R2: Whereas earlier versions had three pairs of input terminals—and were thus triwirable—the SP100R2 has only two pairs, allowing the user to drive the woofer separately from the tweeter and midrange driver. “There was a time when everyone loved to play with biwiring and biamping,” Philip Swift says, “but because we’ve continued to work so hard to balance the speaker overall, we prefer to see the product performing at its best in the field.”

A final note: The Spendor SP100R2 is supplied with a nice-looking black-fabric grille, attached to the baffle by molded fasteners of the usual sort (although the hardwood “frame” around the baffle’s periphery makes the tight-fitting grille unusually difficult to detach). Notwithstanding the textural lightness of the fabric, the grille very slightly dulled the sound, so I did all of my listening without.

Installation and setup
The Spendors arrived at a time when my listening room and every storage nook in my house were already blessed with many more full-size loudspeakers than usual. Consequently, I was able to compare the SP100R2‘s performance directly with that of such things as the Klipsch Heresy III, the Line Magnetic 755i, the DeVore Orangutan O/96, and the Surreal Sound Fifth Row, along with my own Audio Note AN-E SPe HE and Quad ESL references and a borrowed pair of Wilson Audio’s enduringly fine Sophia Series 2s. As I had with most of the above, I used the Spendors in my 12′ by 19′ listening room. Of the three amplifiers I’m fortunate to own, the Shindo 25W Corton-Charlemagne monoblocks sounded best with the Spendors, while Shindo’s somewhat less powerful (footnote 1) Haut-Brion sounded fine but a little less strapping than usual; the SP100R2 wasn’t quite sensitive enough for the 4Wpc Fi 421A.

Footnote 1: The Haut-Brion is rated at 20Wpc, but its output transformer has only a single, 16-ohm secondary, and passes notably less power across a lower-impedance load.