At the same time, let’s not become too blasé about our more familiar tubular friends: the 12AX7, the KT88, and the EL34—especially the EL34. That classic pentode tube, introduced in 1954 by Mullard Ltd., has been at the heart of some of my favorite amplifiers, most of which commit the equally counterrevolutionary sin of being push-pull instead of single-ended. How I would hate to wind up in a world in which fondness for push-pull EL34 amplifiers is met with the same scorn as love for Elton John records, some of which are actually pretty good.

Today I’m enjoying a new EL34-based integrated amplifier: the T-1800 ($5900) from Allnic Audio Labs, the Korean manufacturer whose products and name are distinguished by the inclusion of nickel (footnote 3). As with all Allnic amplifiers, the T-1800’s proprietary output transformers are wound on cores rich in that element, but these newest versions have another trick up their sleeves: Each of the multiple secondary windings of these “full engagement” output transformers is always in circuit, regardless of which output terminals are connected to the speakers. Allnic says that’s important because an idle secondary winding is a devil’s playground for the buildup of parasitic oscillations, which can then reflect back into and thus distort the signal in adjacent windings.

The T-1800 uses two EL34 tubes per channel in Ultralinear mode, to produce 40Wpc. Somewhat surprisingly, given the presence of dual-mono current meters on the front panel and dual-mono toggle switches on the top plate—the positions of the latter determine which of the two tubes per channel is connected to the meter—the T-1800’s output section operates in auto-bias mode. According to designer Kang Su Park, the meters and switches are provided to help the user monitor tube wear. The output tubes are driven by one E180CC dual-triode tube per channel, and initial voltage gain for each channel is provided by half of a 12AY7 dual-triode tube. (Inasmuch as it doesn’t provide line-level gain, the T-1800’s preamp section is passive.) The 12AY7 is installed in one of Allnic’s proprietary Absorb-gel isolation mounts; ordinary sockets are used for the other tubes.

Allnic’s new integrated amp offers few user controls. On the rear panel is a hefty toggle switch for selecting between loudspeaker loads of 8 and 4 ohms. (The T-1800 can be ordered with 8 and 4 ohm or 16 and 8 ohm settings.) The front panel has only two controls: a pleasantly unyielding volume knob that addresses a 41-step silver-contact rotary attenuator switch, and a source-selection knob that provides electronic switching among five line-level inputs (four pairs of RCA jacks, one pair of XLRs). A compact remote handset duplicates all controls except for the T-1800’s rocker-style on/off switch, and adds one control the front panel lacks: a soft-touch mute switch. The line-only Allnic T-1800 has no phono stage, balance control, or mono switch.

Miscellaneous details: AC rectification in the T-1800 is done with solid-state devices, and the amp’s soft-start circuit gradually applies rail voltages only after the tube filaments have had ample warm-up time. The output section uses 6dB of global negative feedback, presumably to minimize distortion and maximize damping factor. Key specifications include a signal/noise ratio of 80dB, a frequency range of 20Hz–20kHz, and an input impedance of 10k ohms. And although it’s not specified, the T-1800’s overall gain seemed abundant.

But . . . a big bass drum!
Auditioned with a borrowed sample of the Shindo Laboratory Aurieges phono preamplifier (see Follow-Up in this issue), the T-1800 was every inch a classic low-power EL34 amp, with just enough of a modern touch to extend its appeal beyond an exclusively vintage-centric fan base. As for the latter quality: Even before I knew that the Allnic’s output stage employed negative feedback, its truly excellent low-frequency clarity and control were very much apparent. While listening to a recently acquired original mono copy of the Beatles’ Please Please Me (LP, Parlophone PMC 1202), I noted that the T-1800 was more explicit than my Shindo Corton-Charlemagne monoblocks—also using two EL34 output tubes per channel, also operated in Ultralinear, but with no global feedback—in its portrayal of Paul McCartney’s electric bass lines. And the T-1800 sounded tighter and more in control when reproducing the orchestral bass drum in the introduction of Elgar’s The Dream of Gerontius, with tenor Nicolai Gedda, and Sir Adrian Boult conducting the New Philharmonia Orchestra and the London Philharmonic and John Aldis Choirs (LP, EMI SLS 987)—although the Shindo amps communicated a superior sense of power and gravitas, notwithstanding their lower output of 25Wpc.

Also in comparison with my Shindo separates, the Allnic integrated had the same abundance of natural textures and well-saturated timbral colors, but presented those qualities with a tonal balance tilted very slightly in the direction of the treble: The T-1800 didn’t sound bright or even bright-ish, but at the top of the audioband the T-1800 had a bit more “air” than the Shindo combo, and more explicitly portrayed such things as room sounds, microphone sounds, and tape splices. Both companies’ amplifiers were above average at forgiving LP surface noises—an indication of their speed and imperturbability, not of any degree of dullness—and neither allowed hum or noise to intrude on my listening. 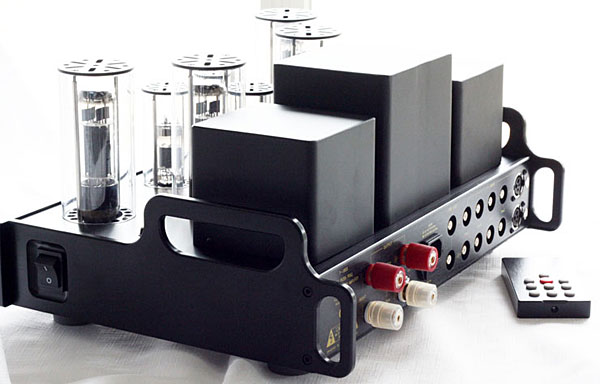 Apart from their just-plain-different tonal balances, there was one thing the Allnic integrated did consistently better than the Shindos, and one performance area in which it fell behind. The former was the T-1800’s impressive openness and transparency—qualities that, for once, were not accompanied by losses of thick timbral colors and textures, or of body and substance in instruments and voices. At least once in past reviews I’ve drawn a parallel between the strengths I’ve just described and the effect one sees when using Adobe Photoshop’s Levels control to “open up” the middle range of an image’s input levels. (In publishing, that’s often a useful way to prepare a photo for clear print reproduction, especially when dealing with a grade of paper that’s easily over-inked.) Sonically, the effect is of hearing new information not by dint of brightness, but by removing acoustic shadows that were not heard as such on first listen. And so: Strings became steel strings (or nylon, or silk-and-steel, or brass-wound, or whatever), and voices became distinct vocal personalities, and murk became near or distant walls, and suchlike.

I wish I could add, “and sonic images became large or small”—but I can’t, and that was perhaps the T-1800’s only sonic shortcoming of note: The amp’s sense of scale was very much lacking at the large end of things. Experience leads me to lay that at the doorstep of global feedback, even while acknowledging the very real and perfectly worthy effects of same. It’s a tradeoff. Some might think: Feedback eliminates distortion, so if it makes things sound less big, then bigness must be a distortion. In light of the fact that the audio arts have seen damn few technologies that, in reducing one form of distortion, didn’t also increase another, howsoever slightly, I can’t help seeing the foregoing as faulty reasoning; but even if it isn’t, in this house, the badge of DISTORTION LOVER has tended to elicit more smiles than shame.

Anyway, the T-1800’s flaws are more than merely outweighed by its strengths: They are overwhelmed. And whereas I feel comfortable attributing the Allnic’s shortcomings of scale to its dependence on global feedback, how can I explain such excellent touch and force from an integrated amp with a passive front end? Not only did the Allnic shine with up-tempo rock, it succeeded at the trickier job of allowing subtler music to sound dramatic and human and alive—as in the Eroica Quartet’s fine recording of Mendelssohn’s String Quartet 1 (CD, Harmonia Mundi HMU 907245). The entire performance sounded so good, so consistently involving through the Allnic, that I feel guilty singling out this or that passage—although I’ll point nonetheless to the stunning sense of touch in the pizzicato notes in the second movement, the startlingly good force in the tutti opening of the fourth movement, and the excellent sense of sheer musical drive throughout. And the entire work benefited from the Allnic’s fine tonality: colorful and textured without being cloyingly, exaggeratedly sweet; open and explicit without being light or bright. Really: This disc through this amp made as good a case for CD playback as I’ve heard in a long time.

I suppose an EL34 amplifier is like a steak dinner, or a day spent fishing, or a drive in the country with the top down: To people who like those sorts of things, every single one is pretty good—but in each category, a few are better than most. And better than most is how I feel about the Allnic Audio Labs T-1800 integrated amplifier: It pressed every one of my EL34-loving buttons and never let up.